So, whilst I was in Edinburgh I took part in the site-specific walking tour of the city: En Route. The ‘show’ is the brainchild of Melbourne-based collective one step at a time like this. It goes like this. You meet in the foyer of the Traverse Theatre in a group of 2-3. Someone takes you half-way up the road, splits you up from the group, gives you a set of headphones, straps an iPod to your wrist, takes your mobile number, and tells you to cross the road, walk down a set of stairs and wait for further instructions. Orienteering, then, crossed with a treasure hunt, and with dashes of psychogeography. 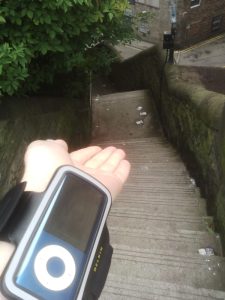 What follows is a 70 minute (?) tour of Edinburgh which leads you down dark alleys, across busy roads, into a Hotel lobby, a shopping centre, and up to the top of a multistorey carpark. Instructions are received as texts on your mobile phone, from the soundtrack on your iPod, are discovered in envelopes behind garage doors and in record shops, daubed in chalk on the increasingly slick pavements.

All the time you are being shadowed, discretely, by your ‘helper’ – ie. the person who fit your iPod/headphone gear. In my case, the shadowing was less than fluid as I failed to receive the first few instructions by text, meaning that I ended up hanging around rather aimlessly. I didn’t mind this though. In fact, it was the interaction with my ‘helper’ – as well as the sense you are being watched over – that gave this experience depth of meaning. I’m pretty au fait with psychogeography/Situationism/derives &c. so all that ‘looking at the city differently’ stuff, whilst fun and important, was hardly new to me. 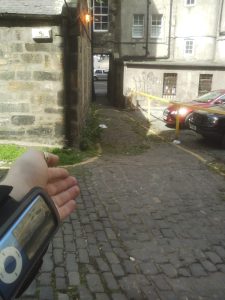 The sense that you are being ‘controlled’ (however benevolently) also, inevitably, leads to the temptation to rebel against that control – even in small ways. At one point I caught a glimpse of my ‘helper’ behind a wall trying to find me, a fantastic role reversal which gave me a brief moment of pride in my urban strolling.

At one point you are led into a backstreet where a hidden wall has been covered in chalk graffiti (by previous participants). You stand here for a few minutes’ contemplation, and are asked to add your own.

Sometimes, you spot other participants; your journey through the city coinciding with others’.

Edinburgh in August, you hardly stand out amongst the street artists, lost tourists, pipers and performers running to shows in full costume. Moments of recognition, though, are compelling – a passing glance with someone who’s “in” on the trick.

You are instructed, at one point, to wait in the lobby of the Balmoral Hotel, and make a phonecall to someone. 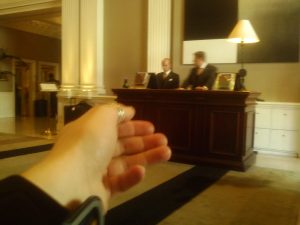 … and then into a shopping centre, to browse the cosmetics department of John Lewis.

There are some nice tricks too. In the multistorey carpark, you come to an abrupt halt, at which point you pick up the path by using a flick-book, which animates a woman towards a door. 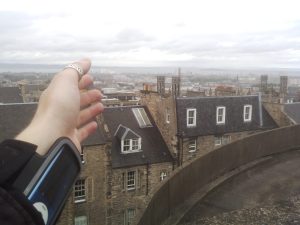 The experience ends with wonderful views of the sea (no need for Arthur’s Seat, then), and then back down for a complimentary cup of coffee – at which point I took off my headphones, and started to interrogate the barrista about the deal the cafe has made with En Route.