In the aftermath of Wednesday’s troubles, the organiser of Dasein Festival hastily assembled a press release to announce an event with Netalie Braun exploring the themes of Violence and Silence. The event comprised the screenings of two films, followed by a Q&A.

I would like to draw your attention especially to Netalie’s hour-long film Metamorphosis (2006), which employs Ovid’s myths in conjunction with contemporary testimony from victims of rape in Israel.

This conceit is realised with formidable skill; the familiar mythological exemplars off-set and illuminated by the modern stories. The latter are shot in super close-up, with bright white backgrounds. The effect is one of intimacy, complicity and cleansing. I’ve not been as moved by a film of this kind – at its heart a documentary, though it makes use of techniques from fiction – for some time.

You can see a trailer here.

After the screening, Netalie revealed that the film is quite controversial in Israel – its release leading to the identification (and in one case, I think, the prosecution) of perpetrators. Bleak, but inspiring.

I visited a great little gallery / arts venue called Aboutt. It was darned hard to locate, being situated on the second floor of a relatively anonymous block of shops and offices in the Monasteraki area of town, with minimal signage. There is a buzzer to get in. It was closed. But luckily the gallery owners – Marie Alouopi and Andreas Diktyopoulos – are very nice and let me in anyway. They are the pair behind the Centre for Music Composition and Performance, and gave me a well-designed book documenting their events and projects to date. Today they were showing their first exhibition in the new venue –  Space is the Place, curated by Lo and Behold. Some excellent reimaginings of urban landscapes in photography, architectural drawings, video, installation art and even embroidery. I wish I could find an image of two drawings by ? which depict the Parthenon in traditional form, but with its columns first geometrically skewed and then folded into intricate, intestine-like tubes. Instead, here’s a screengrab from a piece of video art by Rui Toscano.

Some other stuff I’ve done / seen.

Eaten the most amazing sweet red peppers stuffed with feta.

Visited Gazi, the old gasworks of Athens which are used for events and art exhibitions. Think East London warehouse space, but with all the equipment still intact. 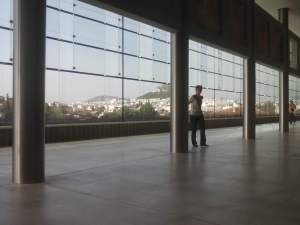 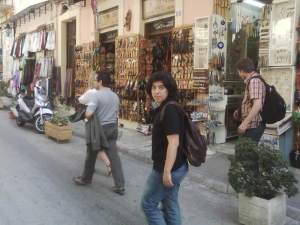 Enjoyed an overpriced meal and walked around Plaka with Netalie, Ivan, Turkish poet (and engineer!) Gokcenur C and head of Literature Across Frontiers Alexandra Buchler.

Factoid: Gokcenur has met Uri Geller, when Geller was representing a Nigerian Prince in a business meeting. Why? Because he can. My friend Nathan was pleased to hear it.

Last night I drank way too much Ouzo with Ivan.

Tonight I gave my first reading (of two) – in collaboration with Theodoros Chiotis, my translator (!). The venue was full, and the poems seemed to go down well. They even laughed at some of the jokes, which is always a bonus.

Here’s a fuzzy shot of the venue, during a stand-out performance by Lina Theodorou.

Finally, let me leave you with a photograph of something I found amusing.