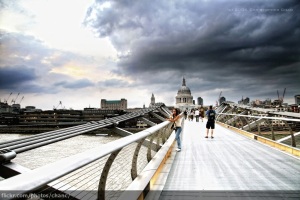 Last night I attended a talk at Bishopsgate Institute entitled ‘A Brief History of Building Tall in London’, given by Susie Barson of English Heritage (I missed the second half, which was given by Rosemarie MacQueen). Barson’s talk was an engaging, if necessarily brief, overview of building tall from medieval to modern London. She spoke well on the Tower, St Paul’s (old and new), Gilbert Scott‘s Midland Grand Hotel (St Pancras), Senate House, and the new ‘Eastern Cluster’ of skyscrapers. I was particularly interested to hear about the way the London skyline has been shaped by persistent restrictions imposed by city authorities on planners and architects – often for practical rather than aesthetic purposes (eg. fire regulations in residential buildings).

However, I left feeling a little annoyed. As Barson’s talk came to an end – and the focus to contemporary concerns – it became increasingly obvious that she, and some of the audience, represent a particularly militant form of architectural/cultural conservatism. Now don’t get me wrong; English Heritage is an important agency who do vital work in preserving historic sites and ensuring that developers take a sensitive approach to their task. But I couldn’t help but think that Barson’s vision of London was not one I shared. She spoke of how English Heritage have developed a quasi-scientific ‘methodology’ for the protection of urban skylines (most famously, views of St Paul’s from key positions). Yet her own disgust at the current building boom in London revealed a more subjective approach. She really let the cat out of the proverbial bag when complaining that one of the proposed skyscrapers (I think it was Heron Tower) would blot out her view of St Paul’s from where she lives – I quote, ‘the heights of North London’.

I felt she was implying with that, and other statements, a sense of personal ownership over a view. But what about people who actually live and work in the centre of London, in the crazy, busy, messiness of it all? And, what with a recession and the Olympics around the corner, what about the city’s social and economic needs?

I suspect that this conservatism is inspired by a long tradition of skyline preservation. I’m thinking particularly of the way Renaissance representations of London by artists such as Van Visscher established a way of looking at the urban environment that incorporated elements such as perspective from the pictorial tradition. And then there’s the eighteenth century boom in all kinds of panoramas that Robert Barker called ‘a kind of pattern for organising visual experience’. You could also call it a kind of framing. I almost imagined the speaker last night holding up her fingers to form a picture frame, squinting through to find the perfect vision of London. But the city is to be lived, inhabited and experienced. It is a muddled, imperfect space full of bodies, interests, ambition and cash; not a picture postcard or a pastoral scene. Barson mentioned Canaletto in her talk, and here’s a Venetian master who, despite those unreal skies, really engaged with a burgeoning capitalist London, recognising that its beauty lay as much in disorder as order. 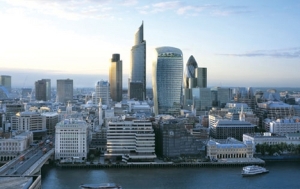 Barson described how coming across a skyscraper is like something ‘crashing down into the street’. She meant that pejoratively, but this is just the kind of urban experience that excites and challenges. The Gherkin is a good example and, whilst initially condemned from some quarters, is now very popular. If people want long vistas and avenues, move to Paris, where Haussman did what Wren couldn’t (his utopian vision of a post-Great Fire London was rejected due to the city’s complex system of land ownership, and a largely medieval street plan is maintained to this day).

Yes, there are issues with unrestricted urban growth, and yes, agencies such as English Heritage do need to make sure we’re developing in a way that is sensitive to the existing landscape and avoids problems such as sun-blotting. It’s also important that the city is not driven just by big money developers. But I for one hope that this cultural conservatism, based on a narrow and idealistic conception of the city as a picture to be gazed upon, does not come to dominate architectural discourse. I welcome the Helterskelter, Cheese Grater, Walkie Talkie and other strangely-monikered constructions.

Incidentally, I hope the Bishopsgate continues putting on events like this. I may not have agreed with Susie Barson’s talk, but it was thought-provoking!